TaxRise saves over 98.7% for client

Vadik Lothar* is a self-employed, small business owner operating a flower shop in New York, New York. Although Vadik didn’t have any years of unfiled taxes, he had not been properly keeping up on his estimated tax payments.

In actuality, his business wasn’t making enough money for him to even pay his estimated tax (ES) payments.

Vadik had not kept track of his estimated tax payments, which earned him many penalties.

Estimated tax payments are normally what self-employed people have to pay to cover not only income tax but also other taxes such as the self-employment tax and the alternative minimum tax.

For those who must file their ES payments each quarter, you can use the Form 1040-ES found on the IRS website.

At the height of Vadik’s hardship, the IRS threatened to deploy collection efforts against him. When Vadik realized his debt had amassed to a staggering $36,000, he knew he needed to seek out professional assistance.

Once we received Vadik’s case, our priority was ensuring that the IRS couldn’t take collection actions against him. To do this, we would need to secure Vadik both power of attorney and set him up on a temporary installment agreement.

Our tax experts diligently and skillfully organized the necessary information to negotiate with the IRS. TaxRise was successful, and the IRS approved both the power of attorney and the temporary installment agreement for our client.

Next, we needed to build a case for Vadik to attain an offer in compromise with the IRS. To do this, we would have to collect a lot of information from Vadik.

Proof of income, rental agreement, car insurance, health insurance, and signed tax returns – some of the various things we use to craft the most ideal case possible.

We used the power of attorney and a temporary installment agreement to halt the collection efforts of the IRS.

TaxRise and Vadik would run into trouble during this information collection process. Both Vadik’s email and his mail were proving inefficient.

After further investigation, we discovered that a large portion of Vadik’s mail was being sent to his old work addresses. Moreover, his email wasn’t working and needed to be fixed.

Despite these inconveniences, Taxrise constructed what we believed to be the most optimal case for Vadik.

TaxRise stopped the IRS from taking collection action against Vadik, and we successfully resolved his $36,000 debt for $500 – a saving of over 98.7%! 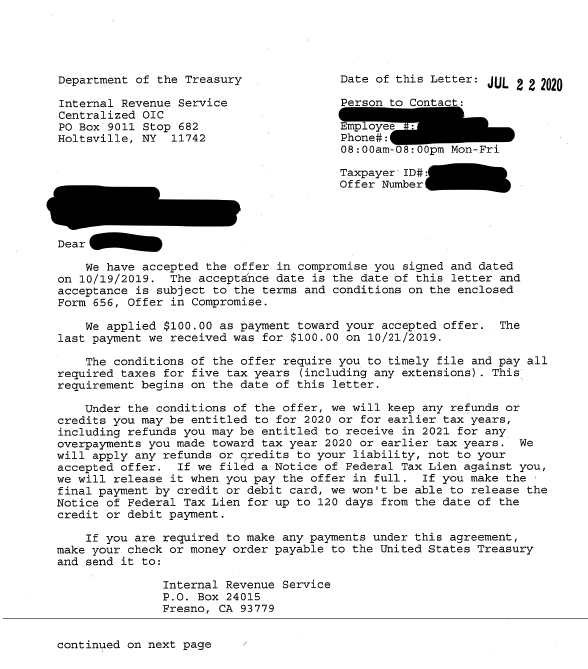