BURLINGTON, NC. — Mr. and Mrs. Erickson of North Carolina are starting 2020 off on a high note thanks to TaxRise.

Mervin Erickson*, a disabled veteran who served in Vietnam. In 2006, Mervin and his wife lost his home and all of his assets due to financial hardships. Their situation got even worse once the recession hit. Their tax debt kept rising, and they had  no feasible way of every paying it off.

Mervin and his wife were forced to move outside of the country because the cost of living in America was too high, but their debt followed them.

The IRS went after their bank accounts and social security payments — leaving them with pennies.

Mervin and his wife were forced to move outside of the country because the cost of living in America was too high, but their debt followed them. When he reached out to TaxRise in late 2018, Melvin had over $100,000 of tax debt to his name and was desperate for a way out.

When you owe a tax debt to the federal government, the IRS only has ten years from the time it first discovers a discrepancy. In the Erickson’s case, the majority of their debt was set to expire in 50 months.

This is not good news for the Erickson’s. The IRS knew that their time to collect on their debt was limited, so they began to take extreme action against the Erickson’s to collect as much money as possible.

Because the Erickson’s didn’t have any assets to place liens against, the IRS went after their bank accounts and social security payments — leaving them with pennies.

Things were dire, and we needed to act fast.

To stop the garnishments and levies, we placed the Erickson’s on an $100  a month Installment Agreement while we worked on preparing their settlement strategy.

Communication with the Erickson’s were difficult. They didn’t have ready access to a computer or fax machine which meant that their case manager, Lilly, had to find creative ways to keep them in the loop as well as ensure that documents were being submitted to the IRS in a timely fashion.

But TaxRise isn't most tax relief companies. We knew that we could do better, and that the Erickson's deserved better.

Despite the communication difficulties, Lilly and her team were able to submit an offer in compromise and presented a case to reduce the debt to $100.

The IRS rejected our offer and countered. They claimed that because the majority of the Erickson’s debt was set to expire in a few years anyway, they would reduce the debt to $5,000. Take it or leave it.

But TaxRise isn’t most tax relief companies. We knew that we could do better, and that the Erickson’s deserved better. So we rejected the IRS’s offer and got back to work.

It was a risky move, but the Erickson’s trusted Lilly and our team when we told them that we knew we could get a larger reduction.

And it worked. We countered with a $500 settlement and after some tough negotiation…the IRS caved.

See the accepted offer from the IRS below! 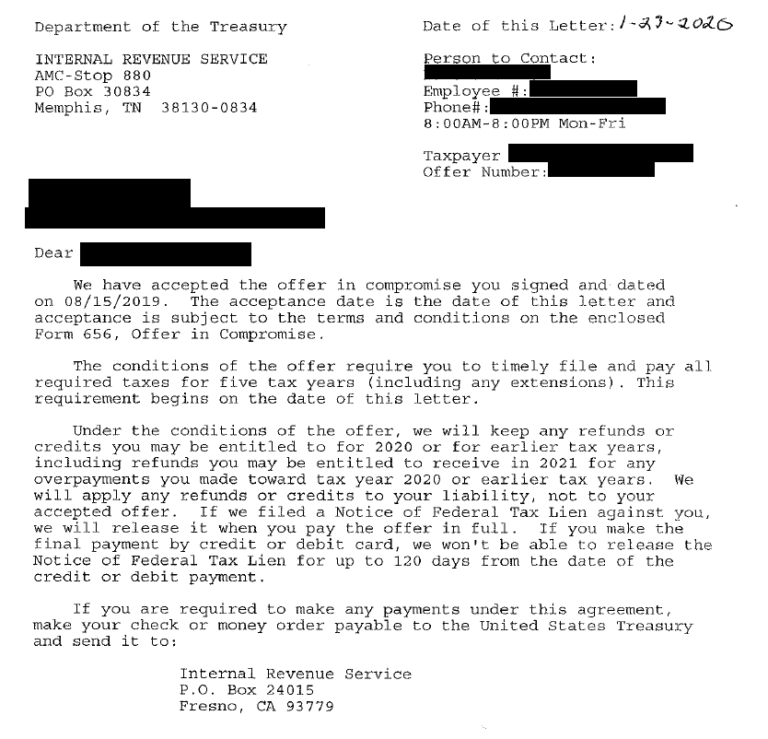